Community leaders Jim Argerbright, Greg Fahl, John Lefever and Bill Overdeer shared their insight on the ‘early years’ of the EDC as an organization.

Lefever shared that some of the events leading up to the formation of the EDC were the development of the former REMC Industrial Park on Business 30 East. The park was developed to attract industry, and one of the first was White Automotive Corporation, which relocated from Colorado. At that time, the decision was made to form the Columbia City Economic Development Commission. That marked the first real movement toward the eastern side of Columbia City and Whitley County followed with the expansion of Superior Essex.

Then in the early 1990s several factors such as the high unemployment rate and jobs leaving the county, led to the formation of the Whitley County Economic Development Corporation (EDC). “In 1991, leaders in the county and city–Jim Teghtmeyer and Bob Smith to name a couple–formed a committee to address the situation,” Lefever said.

That first year was then spent planning and putting together operation procedures. Then on January 9, 1992 the EDC filed incorporation papers with the State of Indiana.

“As a new organization, there was some hesitation from some members of the community, but over time there was less and less resistance, because people started understanding what the EDC was about,” said Fahl.

On March 16, 1992 the Whitley County Commissioners, Jim Argerbright, Karen Howenstine and Debra Bear, presented the EDC with a check for $18,984 as an initial contribution to assist in the establishment of a countywide economic development program. From that point, the board of directors was in charge of fundraising and seeking out an executive director for the organization. The first director of the organization was Ken Moore.

“At that time, the board of directors did all of the fundraising as volunteers,” said Fahl, who was the first chairman of the board for the organization.

Later, in 1994 the county council approved the County Economic Development Income Tax (CEDIT), and Fahl said it really helped the organization “take off.”

Also in 1994, Whitley County approved the designation for one of the largest Tax Increment Finance (TIF) districts in the State of Indiana. And in 1995, CEDIT was implemented in Whitley County.

Shortly after that, Dorinda Heiden-Guss joined the EDC as the new director to lead the organization. Heiden-Guss brought a different set of skills and creativity to the organization, and began tackling new challenges at the EDC. Under her leadership, the team of Heiden-Guss, Argerbright and Overdeer represented the EDC on its first international trip. They traveled to Germany to successfully lure a company to Whitley County.

“With the completion of the government center, the EDC relocated to its current location, and a whole new level of professionalism was required,” Lefever said. Lefever went on to explain that enticements such as TIF districts, ‘shovel ready sites’ and industrial parks became key in attracting new businesses. “All of those things became critical as Whitley County became the new home to a company called Steel Dynamics,” he said.

Whitley County realized how crucial it was to have the proper infrastructure, buildings and business incentives in place when Steel Dynamics, Inc. (SDI) first visited Whitley County, but SDI ended up putting its plant in Butler, Indiana. Argerbright and Overdeer shared memories from the early 1990s when SDI first approached Whitley County about putting an establishment here. “They (SDI) ended up putting a facility in Butler, Indiana, but we thanked Keith Busse and told him to keep us in mind,” Overdeer said.

And Busse, one of the co-founders of SDI certainly did keep Whitley County in mind. Soon after SDI had made its decision to establish a facility in Butler, Whitley County established the first phase of the county Tax Increment Finance district (TIF), to allow the county to provide funding for industrial projects. CEDIT was also approved and implemented in the county shortly after that. “There was a lot of collaboration and working together,” Overdeer said, “The city and county worked together to make the water line happen.”

In 1998, SDI made a $780 million investment in Whitley County to build the SteeI Dynamics Structural and Rail Division. SDI has continued to grow and provide support to the county, and has more than 700 employees.

Argerbright, Fahl, Lefever and Overdeer all emphasized that collaboration has been a key to Whitley County’s growth and success. The EDC has had great relationships and support from the city, county, redevelopment commissions and councils throughout the years.

Along with new companies, we’ve seen many of our long-time Whitley County companies continue to grow throughout the past 25 years. C&A Tool in Churubusco has continued to grow throughout the past 25 years, and now has almost 600 employees in Churubusco. Medical device company, Micropulse, Inc. was established in 1988 in founder, Brian Emerick’s garage. Micropulse is now located in a 260,000 square-foot-facility with room to grow, and employs almost 300 people. Whitley Manufacturing in South Whitley was established in 1945, to provide housing for veterans returning from WWII. Whitley Manufacturing has continued to grow, and provides custom commercial modular buildings to clients around the world. Those are just a few long-time businesses that have greatly impacted the Whitley County community.

Heiden-Guss led the organization up until 2007, when she announced she would leave the EDC. “There was a lot of trepidation–‘what do we do now’ was the feeling at the time,” Lefever said.

In 2007, Alan Tio came aboard as the new president of the organization. Growth and expansion continued under Tio’s leadership. Under Tio’s leadership the EDC developed and grew programs such as the EDC’s Small Business and Entrepreneurship Initiative, Agribusiness Initiative, Medical Device Initiative and welcomed Leadership Whitley County to become a program of the EDC. Rail Connect Business Park was established in 2010 and a spec building was built in the park a few years later. Companies such as DOT America, Impact CNC and Iotron Industries, USA joined the community, and many expansion projects with local businesses happened during that time as well.

Tio led the organization from 2007 until 2015, when he received an offer for a position at the Northeast Indiana Regional Partnership. The EDC still works closely with Alan on a regional level as he serves Northeast Indiana in his position as senior vice president.

Current EDC President, Jon Myers, joined the organization in May 2015. Since that time, the EDC has welcomed several new businesses, and has worked with several local businesses throughout the county to grow and expand, some of those including: AJ Machine, Autoliv, Chapman’s Brewing Company, Impact CNC, Kissinger Electric, Red Star Contract Manufacturing, Restoration Medical and more.

For 2017, the priorities of the EDC are: to increase the supply of talented employees; fill knowledge gaps for entrepreneurs, small businesses, and medium-sized- privately owned businesses; pursue quality of life initiatives that create measurable outcomes; and enhance relationships and coordinate with other community organizations that are pursuing the same priorities.

“It is such a privilege to work for an organization that has had such a positive impact on my home county for the last 25 years,” said EDC President Jon Myers, “I look forward to the many great things that we will accomplish together in the future.” 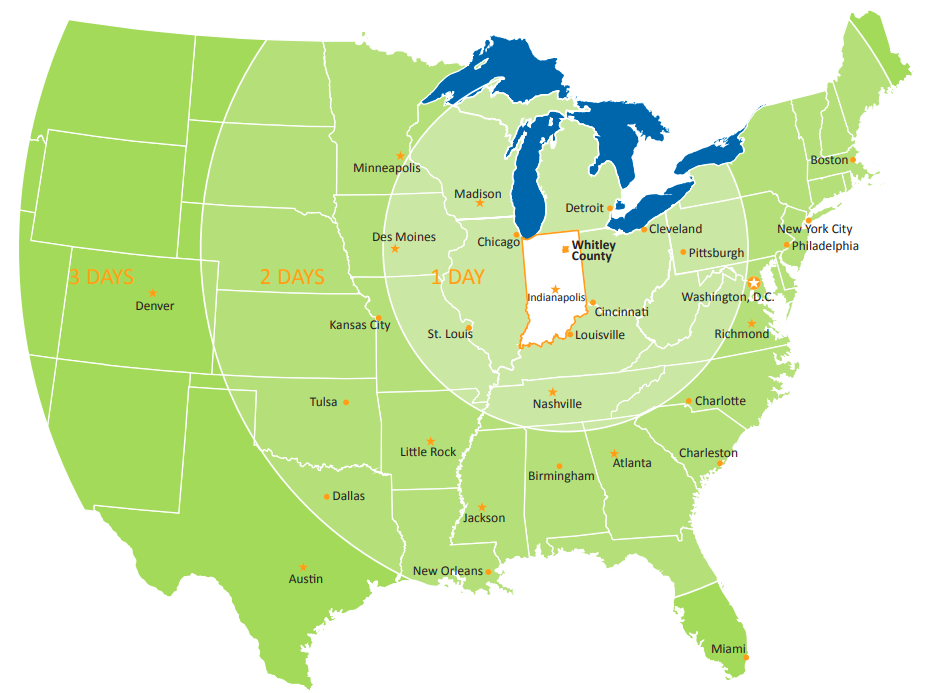